The past 15 years of American democracy have been a downward spiral. Starting around 2007, the global democratic recession hit the United States. And it hit hard, culminating in a violent attempt to overturn a free and fair election on and before January 6, 2021. 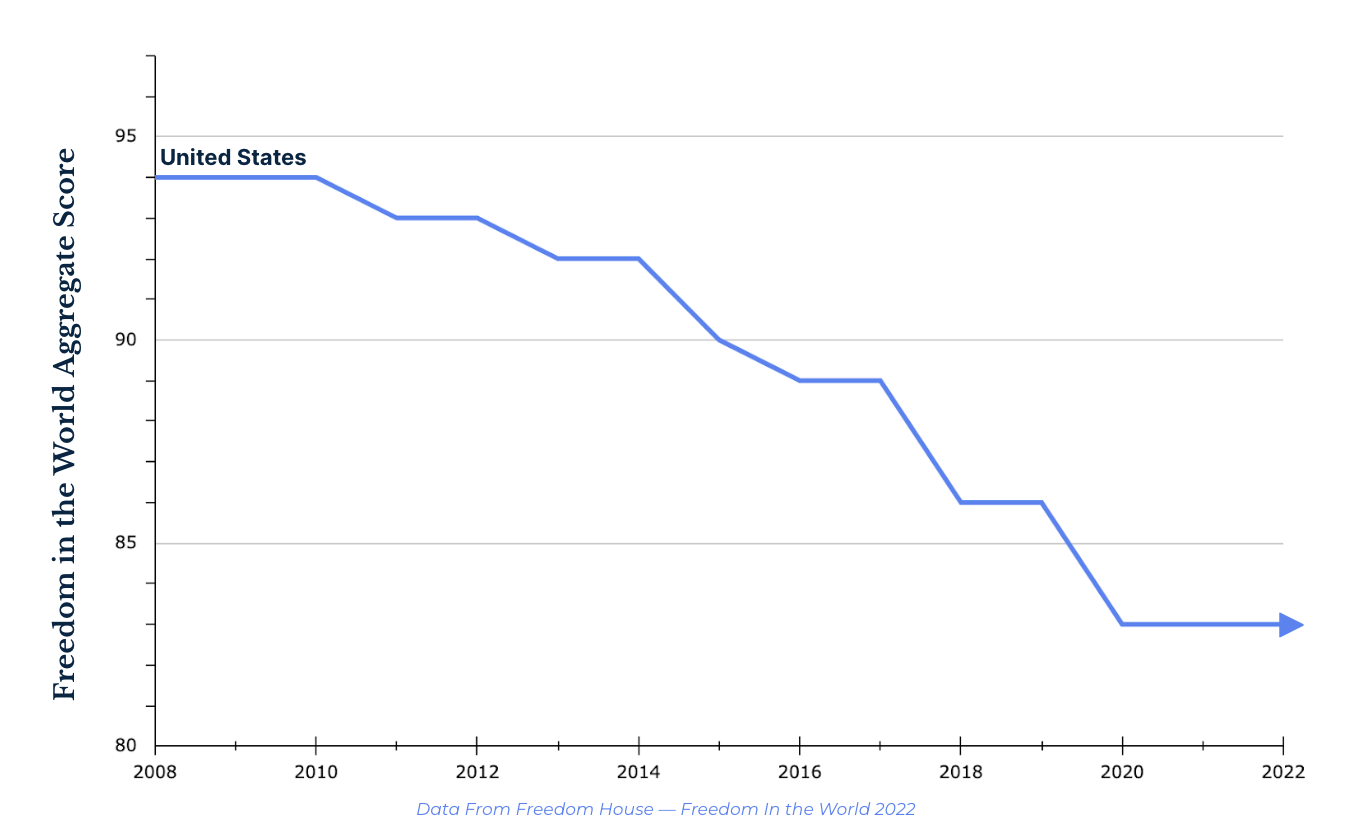 The 117th Congress started its work in the wreckage (literally) of January 6th, and at first, it failed to meet the moment. 2021 as a whole was another grim year for democracy, as party divides in Congress polarized further and landmark efforts to protect voting rights, curtail partisan gerrymandering, and reform the filibuster were all blocked in the Senate.

That failure had consequences, leaving vulnerabilities in our democratic system — especially for marginalized groups and communities of color — that are almost certain to be exploited by authoritarian factions going forward. In many cases, the costs are already bearing out.

But at least directionally, 2022 was different, as Congress notched a number of significant bipartisan advances for democracy. Even with continued shortcomings, above all on voting rights, this marks an important shift in momentum. For the first time in well over a decade, a departing Congress leaves American democracy in slightly better shape than it found it.

Power of the purse provisions

Most important of all, Congress did what needed to be done and reformed the dangerously antiquated and ambiguous 135-year-old Electoral Count Act (ECA). This is the law that governs the counting of electoral votes, and whose peculiarities President Trump and his supporters attempted to use as cover for the illegal scheme to overturn the 2020 election. In many ways, this vulnerability led to January 6th. The new law, in combination with election denying candidates losing their bid for statewide office in key battleground states, has cut off many pathways for future bad actors seeking to overturn the will of voters. This alone strengthens democracy considerably in advance of the 2024 elections.

There were also other, less-visible accomplishments. The same omnibus bill that included the Electoral Count Reform Act included reforms to the presidential transition process to ensure that a winning candidate can move forward on transition work even in the event of a close or contested election. This comes directly in response to the Trump administration’s attempts to slow and disrupt the presidential transition, putting national security at risk.

Additionally, the omnibus included a variety of power of the purse reforms — measures intended to strengthen Congress’ check on executive power abuses — that had been a part of the Protecting Our Democracy Act (PODA). Most importantly, these provide apportionment transparency in an attempt to avoid situations of apportionment abuse, such as when President Trump withheld funds for Ukraine in the summer of 2019. They also include improvements to Congress’ oversight and authority under the Impoundment Control Act of 1974. Together, these provisions will strengthen Congress’s ability to identify abuses of executive power and oversee and assess executive branch compliance with budget and appropriations laws.

Finally, provisions of the National Defense Authorization Act updated the Case Act, which creates a new set of transparency requirements around agreements between the executive branch and other countries. Under the Trump administration, the executive branch signed agreements with other countries, most notably in “Northern Triangle” countries as part of Trump’s immigration policy, without any congressional visibility or oversight. That loophole is now closed.

PDF: Legislative Wins for Democracy in 2022
Transparency and meaningful accountability for January 6th

Overcoming initial setbacks, Congress successfully used its investigatory powers to drive towards bipartisan accountability for the worst attack on the United States since September 11th. With dramatic, televised hearings watched by millions of Americans (in contrast with the usual paucity of a C-SPAN audience), the January 6th Select Committee forced the country to grapple with the details of the attack, and who was responsible.

While much of the accountability process — especially prosecutions for criminal wrongdoing — remains pending, the committee has generally been successful. Without its work, the country would know far less about the details of the plot to overturn the election, and recurrence would be far more likely. Voters took the information seriously, with polls from around the hearings finding significant shifts in voters’ attitudes about the 2020 election. As our colleague, Grant Tudor writes, the January 6 Committee was clearly a success when compared to the dozens of countries that have stood up a similar commission in the past few decades.

Said that the January 6th Select Committee’s hearings impacted their vote in the midterm election, according to polling by Protect Democracy and Citizen Data.

This accountability also came to bear in the midterm elections. The vast majority of election deniers in competitive races lost their elections, even as more moderate Republicans often won on the same ballots. Polls conducted by Protect Democracy and Citizen Data have found that preventing future events like January 6th was a driving concern for at least 20 percent of voters, and especially for Republican and independent voters who split their ballots between Republicans and Democrats. For these voters, what they learned from the committee was critical. 46 percent of voters across five swing states said that the January 6th Select Committee’s hearings impacted their vote in the midterm election.

Even with these successes, the United States still faces a generational battle to protect and perfect democracy. Just because the downward spiral has slowed does not mean the threat has passed. Indeed, the former president who led an insurrection in an attempt to overturn his electoral loss remains a frontrunner for his party’s nomination, the same party that gained control of the House of Representatives.

As such, 2023 could bring a return to gridlock — though bipartisan passage of democracy-related legislation like protecting election workers and requiring paper ballots at the polls is possible — and with false claims and conspiracy theories about past elections still rampant, threats to the 2024 election and other future contests remain very present. Moreover, it remains eminently plausible that an authoritarian-minded candidate could return to the White House in two years. The next attack on our democracy may not be as dramatic as armed militia members crashing through windows at the Capitol, but it may be no less damaging.

Congress, and the American people, should take the success stories of 2022 not as an opportunity to declare victory, but as a hopeful shift in trajectory — a reminder that progress is possible — and an example to build on in years ahead. Democracy is an unending project; what matters most is that we continue to find our way back on the path to perfecting it.

Blake Jelley devises communications and advocacy strategies to address threats to democracy and promote reforms to democratic institutions at the federal and state level.

Ben Raderstorf is a policy advocate. He helps direct policy and communications work around systemic threats to American democracy. He also contributes to Protect Democracy's work to rebuild democratic institutions and electoral systems to make them more resilient and sustainable.